Split arrays or matrices into random train and test subsets

Quick utility that wraps input val > next(ShuffleSplit().split(X, y)) and application to input data into a single call for splitting (and optionally subsampling) data in a oneliner.

Read more in the User Guide .

If float, should be between 0.0 and 1.0 and represent the proportion of the dataset to include in the test split. If int, represents the absolute number of test samples. If None, the value is set to the complement of the train size. If train_size is also None, it will be set to 0.25.

train_size float, int, or None, (default=None)

If float, should be between 0.0 and 1.0 and represent the proportion of the dataset to include in the train split. If int, represents the absolute number of train samples. If None, the value is automatically set to the complement of the test size.

Whether or not to shuffle the data before splitting. If shuffle=False then stratify must be None.

stratify array-like or None (default=None)

If not None, data is split in a stratified fashion, using this as the class labels.

Data is infinite. Data scientists have to deal with that every day!

Sometimes we have data, we have features and we want to try to predict what can happen.

To do that, data scientists put that data in a Machine Learning to create a Model.

Then is when split comes in. 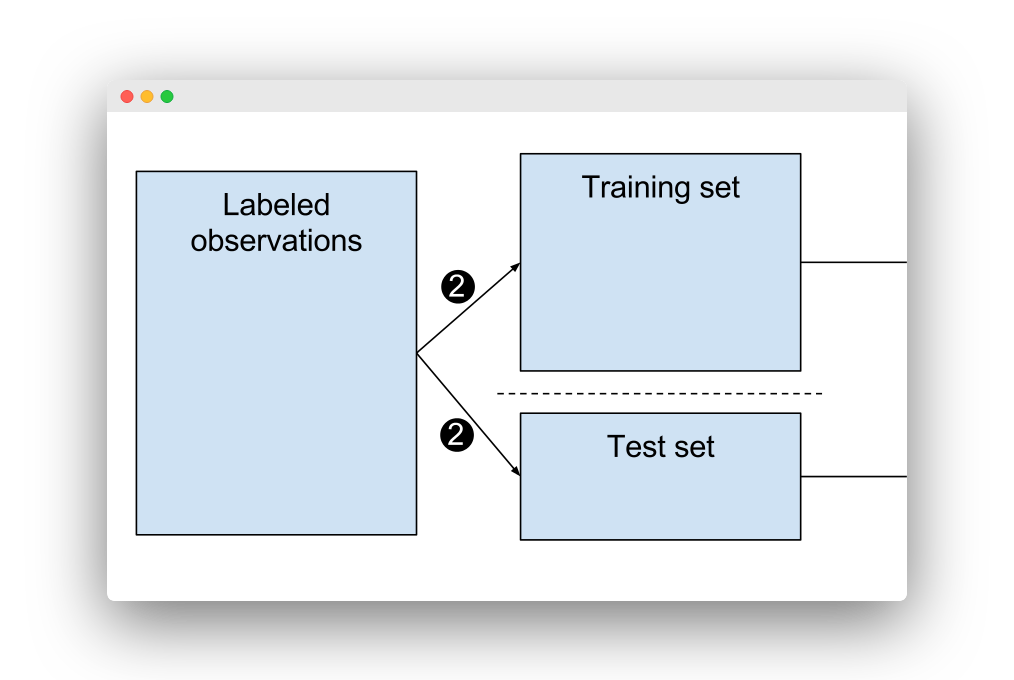 Knowing that we can’t test over the same data we train, because the result will be suspicious… How we can know what percentage of data use to training and to test?

Easy, we have two datasets.

x Train and y Train become data for the machine learning, capable to create a model.

Once the model is created, input x Test and the output should be equal to y Test.

The more closely the model output is to y Test: the more accurate the model is.

You can verify you have two sets:

Data scientists can split the data for statistics and machine learning into two or three subsets.

Anyways, scientists want to do predictions creating a model and testing the data.

When they do that, two things can happen: overfitting and underfitting.

Overfitting is most common than Underfitting, but none should happen in order to avoid affect the predictability of the model.

So, what that means?

Overfitting can happen when the model is too complex.

Overfitting means that the model we trained has trained “too well” and fit too closely to the training dataset.

But if it’s too well, why there’s a problem? The problem is that the accuracy on the training data will unable accurate on untrained or new data.

To avoid it, the data can’t have many features/variables compared to the number of observations.

Underfitting can happen when the model is too simple and means that the model does not fit the training data.

To avoid it, the data need enough predictors/independent variables.

Cross Validation is when scientists split the data into (k) subsets, and train on k-1 one of those subset.

The last subset is the one used for the test.

Some libraries are most common used to do training and testing.

Finally, if you need to split database, first avoid the Overfitting or Underfitting.

Do the training and testing phase (and cross validation if you want).

Use the libraries that suits better to the job needed.

Machine learning is here to help, but you have to how to use it well.

There is a pull request here. But you can simply do train, test = next(iter(StratifiedKFold(. ))) and use the train and test indices if you want.

Heres some code(directly from above documentation)